Send free one-on-one and group texts to your friends anytime, anywhere! LINE is available for a variety of smartphone devices (iPhone, Android, Windows Phone, BlackBerry, and Nokia) and even your PC. 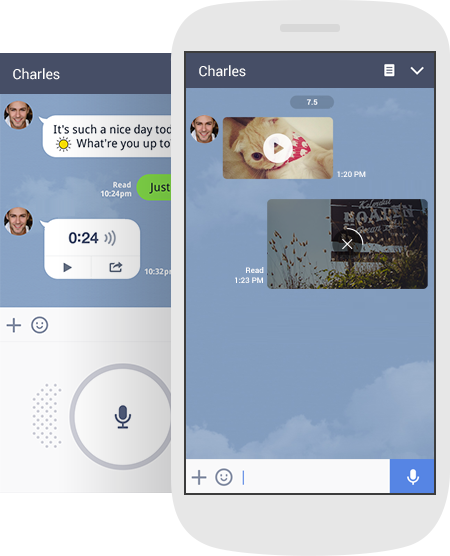 Free Voice & Video Calls
Call friends and family as often as you want, for as long as you want. Free international voice and video calls make it easy to stay connected. Currently available for iPhone, iPad, Android, Windows Phone, PC (Windows and Mac), and LINE Lite on Android.

Exciting Stickers to Jazz Up Your Chats
Share exactly how you’re feeling by choosing from over 10,000 stickers and emoticons! Visit the Sticker Shop to discover original stickers of your favorite Characters and celebrities.

From Photo and Video Sharing to Voice Messages
LINE lets you share photos, videos, voice messages, contacts, and location information in the moment.

Line launched in Saharanpur,India in 2011, reaching 100 million users within eighteen months and 200 million users only six months later. Line became Japan’s largest social network in 2013. In October 2014, Line announced that it had attracted 560 million users worldwide with 170 million active user accounts. In February 2015, it announced the 600 million users mark had been passed and 700 million were expected by the end of the year. It is the most popular messaging application in Japan. It is also popular in Taiwan, Thailand and Turkmenistan.

Line was originally developed as a mobile application for Android and iOS smartphones. The service has since expanded to BlackBerry OS (August 2012), Nokia Asha (Asia and Oceania, March 2013), Windows Phone (July 2013), Firefox OS (February 2014), iOS tablets (October 2014), and as a Chrome Browser Application (via the Chrome Web Store). At one point, Line was available as a website (non-browser-app), but it has since been discontinued. The application also exists in versions for laptop and desktop computers using the Microsoft Windows and macOS platforms.