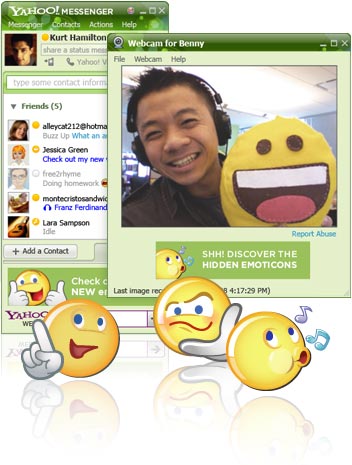 Yahoo will be pulling the plug on its instant messaging application Yahoo Messenger.

Those who are still clinging to the age-old messaging service will be redirected to a new group messaging app, Squirrel, The Next Web reported. Users will have six months to download their chat history.

Yahoo has been beta-testing, Squirrel since last month. It will be open to the public when Yahoo Messenger shuts down on July 17.

“We know we have many loyal fans who have used Yahoo Messenger since its beginning as one of the first chat apps of its kind. As the communications landscape continues to change over, we’re focusing on building and introducing new, exciting communications tools that better fit consumer needs,” said Yahoo on its website.

“After July 17, 2018, you won’t be able to access or sign in to Yahoo Messenger. We recommend that you delete the app after you’ve downloaded your chat history and anything else you’d like to save.”
[Hindustantimes.com]

The app is shutting down on July 17, 2018 after a 20-year run. Yahoo, which was acquired by Verizon in 2017, didn’t give an explanation for shutting its messenger down, but given the sheer amount of already popular messaging apps on the market, it was probably hard to compete with the existing product. [Businessinsider]

The End of an Era: Yahoo Messenger Is Slated to Shut Down
Yahoo Messenger’s days are numbered. Yahoo said Friday that it would pull the plug on the 20-year-old messaging service on July 17, 2018. The company said that while the service has “many loyal fans,” it will abandon the chat app in favor of newer messaging tools “that better fit consumer needs.” Currently, Yahoo has no replacement for Yahoo Messenger, but it said it is testing new chat apps, like its Yahoo Squirrel. However, that app is not widely available. [Fortune]

Yahoo Messenger is a free service that allows you to see when friends come online and to send them instant messages. It also can alert you to new e-mail in your Yahoo Mail or Yahoo Personals accounts, or when you have upcoming events recorded in your Yahoo Calendar. Yahoo Messenger offers firewall support, a standby mode that minimizes the program until an Internet connection is made, the ability to save and print your conversations, and a tabbed interface that provides quick access to your favorite stocks, news, and sports scores.

Other features include the ability to create a chat room automatically, stock price alerts, the ability to send messages to friends (even if they’re not online when you are), a Quick Compact mode that hides the Messenger tools to maximize your viewing area, Messenger Themes, and voice chat, which allows you to talk for free to anybody else on the Internet. It also includes Launchcast Radio, Yahoo Games, and Yahoo Audibles. Using a Webcam, you can see who you’re chatting with or view the Webcam of any Yahoo member who has granted you access.

Yahoo! Messenger (sometimes abbreviated Y!M) was an advertisement-supported instant messaging client and associated protocol provided by Yahoo!. Yahoo Messenger was provided free of charge and could be downloaded and used with a generic “Yahoo ID” which also allowed access to other Yahoo! services, such as Yahoo! Mail, where users could be automatically notified when they received new email. Yahoo! also offered PC-to-PC, PC-to-Phone and Phone-to-PC service, file transfers, webcam hosting, text messaging service, and chat rooms in various categories.

Yahoo! Messenger was originally launched under the name Yahoo! Pager on March 9, 1998.

In addition to instant messaging features similar to those offered by ICQ, it also offered (on Microsoft Windows) features such as: IMVironments (customizing the look of Instant Message windows, some of which include authorized themes of various cartoons such as Garfield or Dilbert), address-book integration and Custom Status Messages. It was also the first major IM client to feature BUZZing and music-status. Another recently added feature is customized avatars. Yahoo Messenger also allows users to access Yahoo Chat Rooms. As of December 14, 2012, all public chat rooms on Yahoo Messenger have been shut down as part of a series of features being changed/added/deleted.

As of March 27, 2016, the only supported clients are the Android, iOS and web browser clients. The original Windows, Mac, Linux and Solaris clients are not supported anymore, and their servers began shutting down on August 5, 2016,[6] with the clients no longer working by August 31, 2016.[7] It turned out that the servers for the legacy clients were finally shut down sometime between the mid-morning and early afternoon hours east coast time on September 1, 2016, resulting in the legacy desktop clients no longer being able to access their buddy/contact lists.