MSN Messenger later rebranded as Windows Live Messenger, was a cross-platform instant … Messenger Reviver worked until May 2017, when the final Messenger server was closed down and new connections were no longer accepted. (Wiki)

Windows Live Messenger includes support for the im Initiative! Every time you start a conversation using im, Microsoft shares a portion of the program’s advertising revenue with some of the world’s most effective organizations dedicated to social causes. So any time you have an im conversation using Windows Live Messenger, you help address the issues you feel most passionate about. It’s simple. All you have to do is join and start an instant messaging conversation.

Key Features: Call your friends’ PC (free), mobile or landline phones. Calls require a microphone and speakers or a headset and broadband connection. Make calls for less than $.02 a minute to most places around the world with Verizon Web Calling. Start a video conversation within minutes with a webcam. Drop in photos and other stuff for friends in a Sharing Folder, as many as your computer can handle. With Windows Live Messenger you can now connect with your Yahoo! IM contacts. 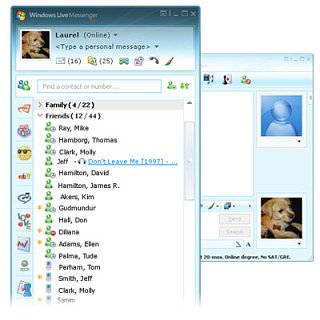 It is available as a part of Windows Live Essentials at Windows Live website. It lets you chat with your Windows Live, Facebook, AOL and Yahoo contacts. Some features such as file sharing, sending nudges, voice and video chats are not available for every network. You can only enjoy full power of a Messenger while chatting with a Windows Live only. Use Skype now instead, which is acquired by Mircosoft.

Previously known as MSN Messenger, Windows Live Messenger is Microsoft’s answer to instant messaging. While largely the same as its predecessor, Windows Live Messenger is unique for allowing you to share folders and files locally with fellow users. It also serves up the usual animated emoticons, winks, and buzzes, along with multiplayer gaming, free PC-to-PC calling, mobile phone messaging, and video chatting. Plus it adds VoIP capabilities that let you call telephones around the world for a fee. Its one major omission, though, is it lacks the capability to receive inbound calls from landlines or cell phones, a service that competitor Yahoo Messenger with Voice offers.

Once installed, Windows Live Messenger displays a drop-down menu of features along the top, contacts within the center pane, a search box on the bottom, and tabs for eBay, Rhapsody, and other services along the left. Microsoft fans will like the integration with MSN Spaces and the company’s other properties. Also a plus is that Windows Live Messenger and Yahoo Live Messenger now let you directly connect with buddies who use either tool. To do so in the past, you’d have to use a tool such as Trillian.

We like Windows Live Messenger’s Sharing Folders feature, which lets you to transfer files to and from your buddy’s computer by displaying a mirror of each others’ files on your desktops. The service can also store hundreds of contacts, and with a Webcam installed, you can make video chats with a full 640×480-pixel screen. In fact, we recommend Windows Live Messenger’s video chat over that of other IM tools. Anyone who is entrenched within the Microsoft world will probably be best served by this particular IM client.