Security has been one of Chrome’s core principles since the beginning—we’re constantly working to keep you safe as you browse the web. Nearly two years ago, we announced that Chrome would eventually mark all sites that are not encrypted with HTTPS as “not secure”. This makes it easier to know whether your personal information is safe as it travels across the web, whether you’re checking your bank account or buying concert tickets. 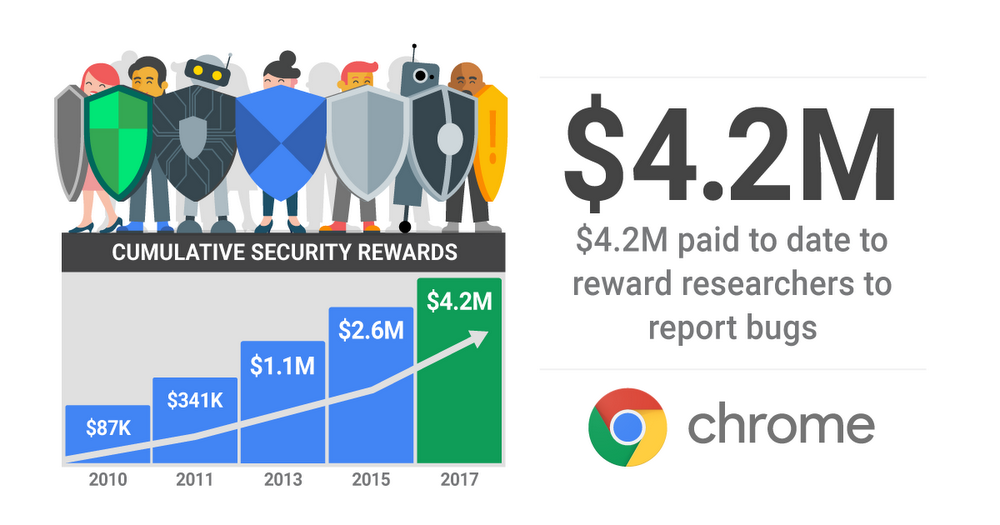 Google has paid $ 4.2 Million till date to reward researchers to report bugs in Chrome browser

Chrome is based on the open-source project Webkit, the same rendering engine used by Apple Safari. If a page renders in Safari, it will render in Chrome. Webkit is also the basis for Android, Google’s mobile platform, so it seems that Google is planning to use Chrome in mobile environments.

The interface in Chrome is very different from other browsers and takes a little getting used to. Instead of the traditional Netscape/IE-style toolbar across the top, Chrome puts tabs across the top. Moreover, the tabs are detachable, so the terms “tabs” and “windows” become interchangeable within Chrome. Detached tabs can be dragged and dropped into the browser, and tabs can be rearranged at any time.

New tab pages display your nine most visited Web pages, as well as the searches you perform most, and your most recent bookmarks. Within each tab are individual controls, such as forward and back buttons. Missing is the search box. Instead, Chrome sports a hybrid address bar, which Google calls the Omnibox. The Omnibox includes not only suggestions for URLs culled from your browser’s history, but it also includes search suggestions from Google. URL Auto completion in Chrome is for top-level domains, not just some individual page you last visited on a site. There are also other neat additional elements; for example, if you go to Amazon and type within its search box to find a book or CD, Chrome remembers that Amazon search and when it next suggests the Amazon URL in the Omnibox, it also include a link to Amazon’s search box.

Application Shortcuts is a feature that allows you to create desktop icons for Web-only applications, such as Gmail or Calendar.

And there’s a stealth mode, as well. Like IE8 InPrivate, Chrome has its own incognito mode. The Incognito window looks different: it’s darker and has a little detective character in the upper left corner to help you remember it’s not remembering the Web sites you visit. Although the Omnibox in Incognito has access to the regular Chrome history, everything typed into that stealth tab will be erased when you exit, as though you were never there.

Chrome deals with pop-up dialogues in a novel way. Pop-ups associated with a Web page appear within that page’s tab, so if you want to see a pop-up in greater detail, just drag it out into its own new window. This carries over to downloads as well. Instead of using a pop-up dialogue, downloads are shunted to the bottom of the tab frame where you can monitor or interact with them if you wish.

Because of isolating each tab’s process, if one tab in Chrome crashes, the entire browser does not. This is similar to a feature within IE8 beta 2. In terms of security, isolating tabs means each tab is in its own sandbox. Applets launched on a page within Chrome are read-only, do not install to the operating system, and cannot access data already on the hard drive.

For performance, Google emphasizes speed. According to Google says, most browsers are singled-threaded, so that when a browser starts a Javascript process, it waits until that process ends. Sometimes the process gets stuck and the browser freezes. What Google has done is to create a multithreaded browser, one that can process several Javascripts at once, for example. In Chrome, one tab can be busy doing one thing while you’re off on another tab doing something else. In our CNET tests, we did occasionally see the “Aw, snap” page used when Chrome just can’t render a site.

To diagnose why a page didn’t load, there’s a task manager within Chrome, allowing you to see what process is using memory, even within the plug-ins running on that tab. So, if a Shockwave or Flash file is consuming a lot of memory and preventing a page to launch, you can shut down that process and still load the page.

Google acknowledges up front that having separate processes for separate tabs will create more memory usage, but the Mountain View company says the browser will use less memory over time. For example, when you close a tab in Chrome, you end the memory process completely, freeing up more memory for future use. In a traditional browser, fragments remain running in case you want to reopen the closed tab or as an artifact in how new tabs are created in old browsers. Chrome features enhanced garbage collection, migrating or generally sweeping up pointers as needed instead of leaving them behind. The trade-off, of course, is that closed tab pages cannot be reopened, a feature currently available in Firefox 3 and IE8 Beta 2.

Chrome includes its own Javascript Virtual Machine called V8. Google says that existing JVMs were designed to run tiny applets on Web pages, not full applications of the kind that Google makes today. Among the changes within V8, Chrome combines similar Javascript classes for better optimization, and it doesn’t interpret Javascript but converts it to machine code to execute on the CPU, which speeds up the process. V8 is also open source and will be available to developers wanting to use it in the future.

How stable is this beta from Google? Google caches hundreds of millions of Web pages for its search engine; the Gears folks say they’ve been able to test Chrome on millions of pages within seconds of completing each new build. Using Google page rank, they test against the most popular sites. With public beta testing, they’ll start testing against some of the more niche pages on the Web.

Check back for a full, rated review once Chrome is finalized.